The Ancient Art of Bonsai

There are 5 openings remaining at this time.

There are 5 openings remaining at this time. 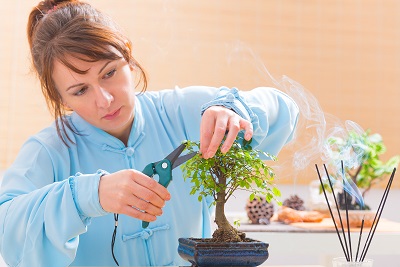 Bonsai is a technique used to grow and train dwarf trees and other suitable plants in shallow or small containers to create living works of art. Curious about the roots of this ancient practice? Join experienced bonsai enthusiast Joshua Cooper at his plant shop, the Deku Tree in downtown Sioux Falls, for a two - part information-packed introductory course that will teach you what you need to know not just to keep a bonsai alive, but to help it thrive! We will cover a broad range of topics all aimed at helping you learn how to select and train almost any plant into a bonsai. Class includes one specimen of your choice to take home, planted and styled in a training pot. All the tools and wire you need to give your bonsai a good starting shape will be available in class as well. The second session of class will be two weeks after the first to allow your bonsai the time it needs to recover and will focus more on designing and styling your tree. Additional materials, soil and specimens available for purchase in class at the Deku Tree.

Joshua Cooper is a local from Humboldt, SD and has recently returned after performing for the last decade! Before earning his BFA in Acting at BYU, he performed literally hundreds of times on multiple stages in dozens of roles. Most noteworthily as Wesley in a stage adaptation of The Princess Bride, Greg in Reasons to be Pretty, d'Artagnan in The Three Musketeers, and the title character in The Picture of Dorian Gray. He also toured elementary schools with a Children's Theater performing Babe. After graduating, he moved to Los Angeles to pursue film acting. During his 4 years in California, Joshua landed two feature films, several guest star roles in TV shows and booked multiple commercials! As of 2021, you'll find him nurturing his roots and tending to his passion for plants and green thumb in his plant shoppe, The Deku Tree, in downtown Sioux Falls.